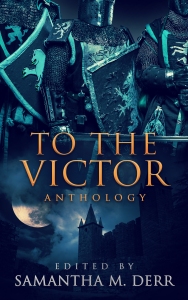 Kyrrin is a knight of the Queen’s Guard and has sworn to protect the Queen with his life. When the Queen falls ill from some magical malady, the entire kingdom rallies to her cause, but to no avail. Just when he is about to lose all hope, Kyrrin is given a map to a magical flower that just might save his Queen.

Excerpt: For Queen and Country

“Where is my daughter? Where is she?” the queen cried, delusional to the point of hallucination.

Kyrrin dropped his head into his hands. He and two other knights of the queen’s Guard kept vigil by her bedside, but despite the other knights’ devotion, Kyrrin couldn’t imagine they felt the same pain he did. How could they?

He had to turn away from the sight of his queen, who no longer looked anything like her strong and robust self, but there was nothing comforting to see. The palace room was built of cold grey stone that, while excellent protection from enemies and the elements, was unyielding to his need for warmth; the curtains were drawn over the windows like a shroud. Royal family members, governors, and healers clustered together but paid him no mind. All their attention was focused on their queen, who lay still and weak amid her bed trappings, the center of attention as everyone watched and waited. The people were eerily silent, not even whispering to each other, which made him even more uneasy.

The queen was dying. The royal physician had announced that very afternoon that there was nothing more he could do for her, nothing anyone could do for her. It was time to prepare for the inevitable.

The Queen’s Guard didn’t cry. They didn’t let others see what they felt inside; they didn’t give in to the urge to lay their emotions bare for the world to see. As the heroes of their people, they remained stoic, strong. They kept their masks in place. They didn’t let the world see who they truly were. They were not to be seen as ordinary people, but as something solid and infallible.

Kyrrin took a deep breath and sat up straighter, watching the queen toss and turn on her bed. What was left of her glorious hair—once her pride and joy—had been reduced to a brittle, colorless wisp around her grey face. She was so thin, he was surprised she didn’t injure herself as she tossed.

Her cries cut Kyrrin to his soul. If he could give the queen her daughter back, he would.