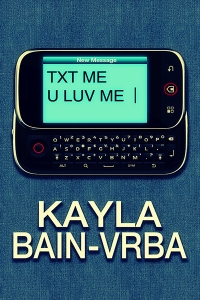 Receiving a dirty text from a random stranger should have resulted in nothing more than a hasty apology from said stranger and Avery wiping the mortifying incident from his memory. What happens instead is a naughty conversation that becomes two, becomes friends, becomes a relationship that leaves Avery confused about who and what he really wants.

Excerpt: Txt Me U Luv Me

Avery Kussow stared at his cell phone. Who the hell was texting him that?

Avery blinked. He didn’t even know anyone named Beaux, much less anyone who would be texting him about lube.

Why was he still talking to this person? True, he was bored, but he could just get up and put in a movie he hadn’t seen twenty times before. Texting this stranger was just weird. ‘LOL’ wasn’t a particularly loquacious text, so whoever it was probably wouldn’t reply anyway.

As he expected, there was no reply, so Avery made himself get out of his comfy bed and change the movie. He was feeling like a chick flick just then, a little sexy but mostly funny. He had just gotten through the opening credits and theme song—which he bopped his head along to—when his phone lit up.

Avery hesitated, his fingers hovering above his phone. He shouldn’t be texting this person—Beaux. He didn’t know him. And even if he did, it was hardly an appropriate conversation, especially since he had a boyfriend. But still, he wanted to keep the conversation going. It felt nice to have someone he could talk about sex with, which he certainly couldn’t do with his boyfriend, Royal. What was the harm in a little texting? It was just like sex talk between girlfriends. No harm, no foul.

Avery stared at the already sent text, too late to take back. He had just meant to inquire casually, but that text looked dangerously dirty, like he was initiating some kind of phone sex—which he certainly wasn’t! He was just looking to talk—well, text.

Avery stretched out on the bed, rolling onto his stomach, and programmed Beaux’s number into his phone. It looked weird to get texts from a phone number, like he was talking to a computer. Thinking about it in the lull between texts, the entire conversation was a little unorthodox. He had a boyfriend, and here he was discussing sex with a stranger. Hadn’t his mother taught him better than that?

Avery made up his mind then, that even if it was a little weird, he was enjoying himself more than he wasn’t. And there was nothing wrong with talking about sex. Everyone needed a friend they could confide in. His friend just happened to be a stranger he’d never me who had accidentally texted him about lube.